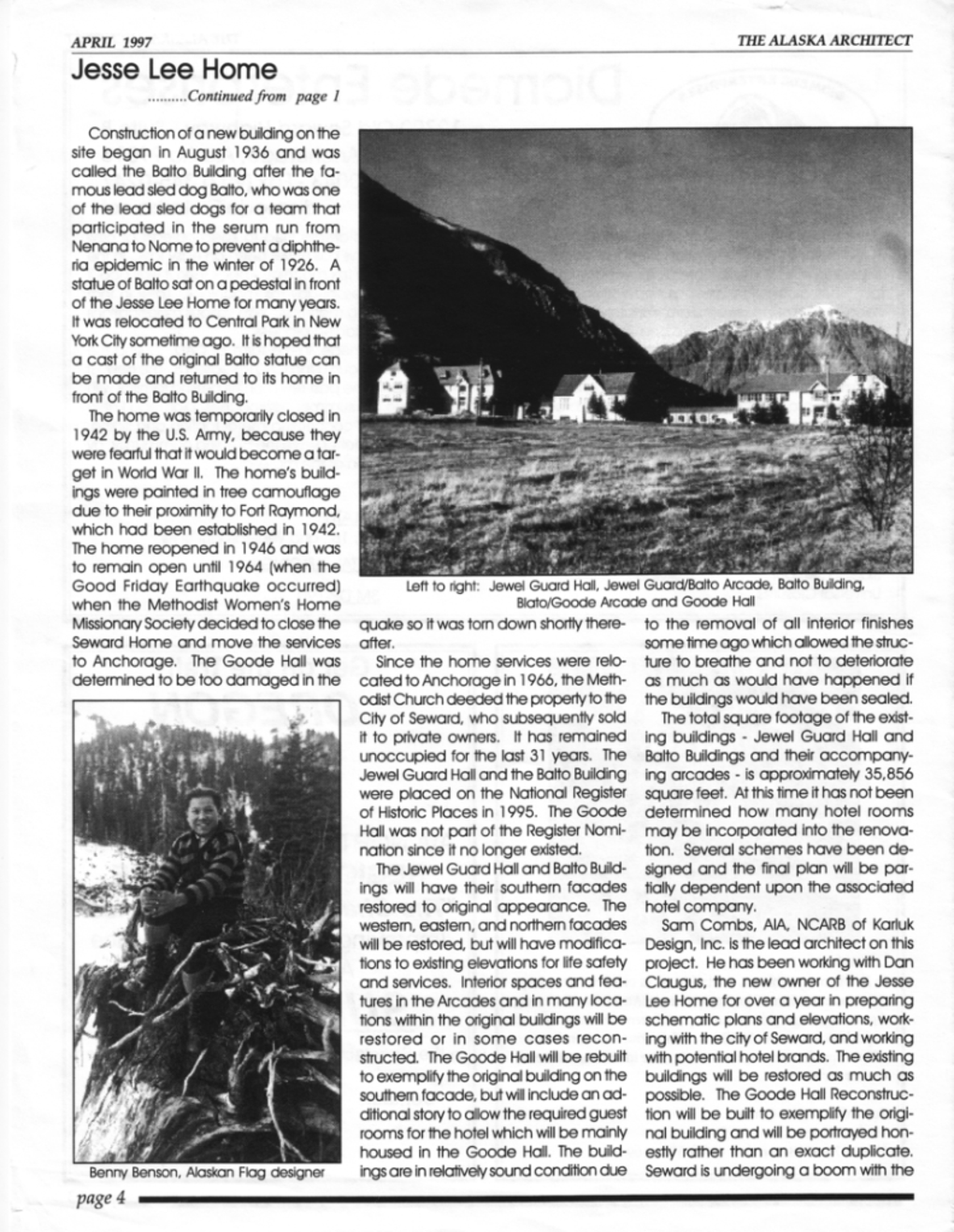 Benny Benson, designer of the Alaska State Flag and resident of the Jesse Lee Home. 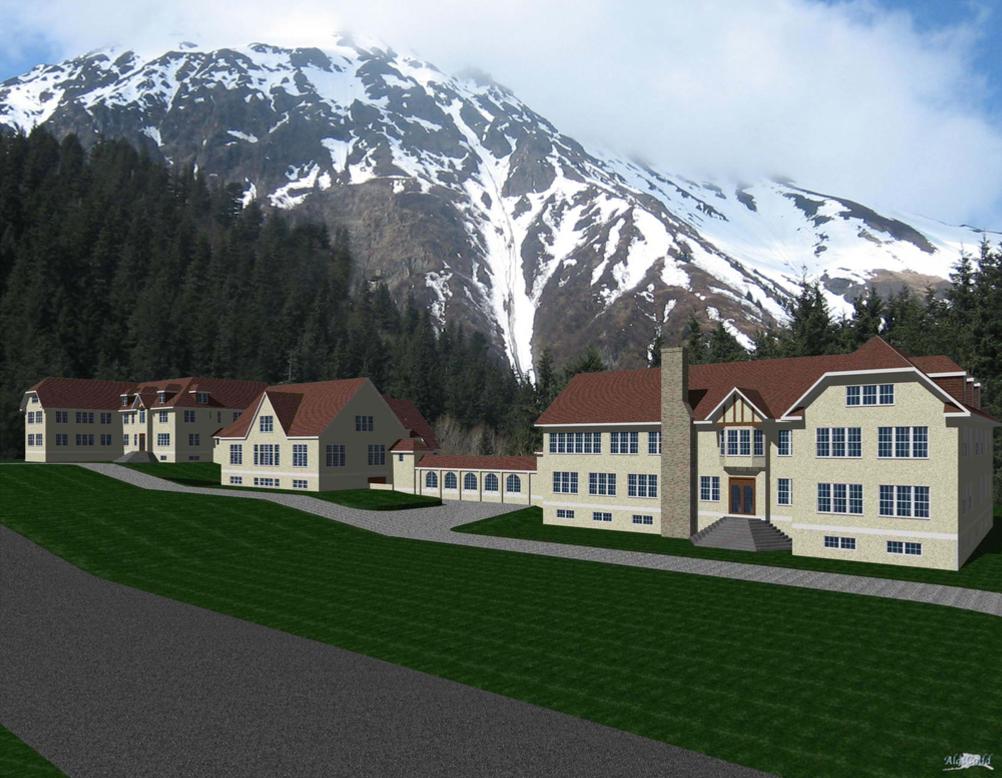 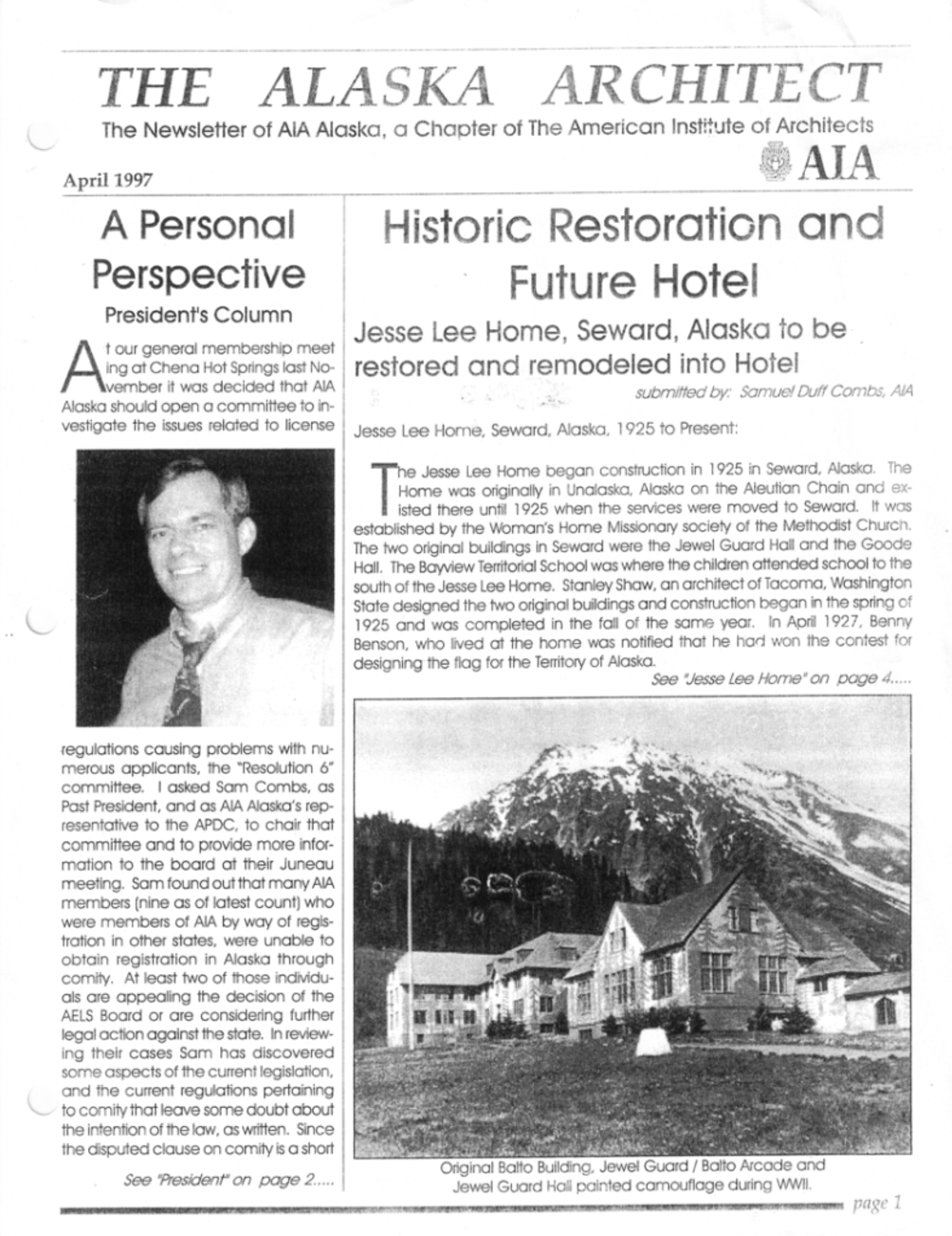 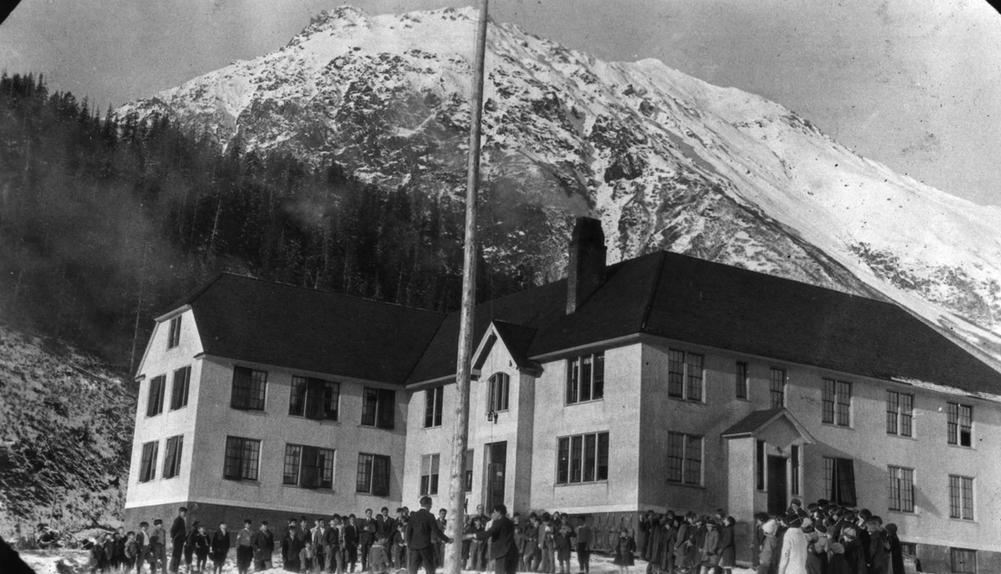 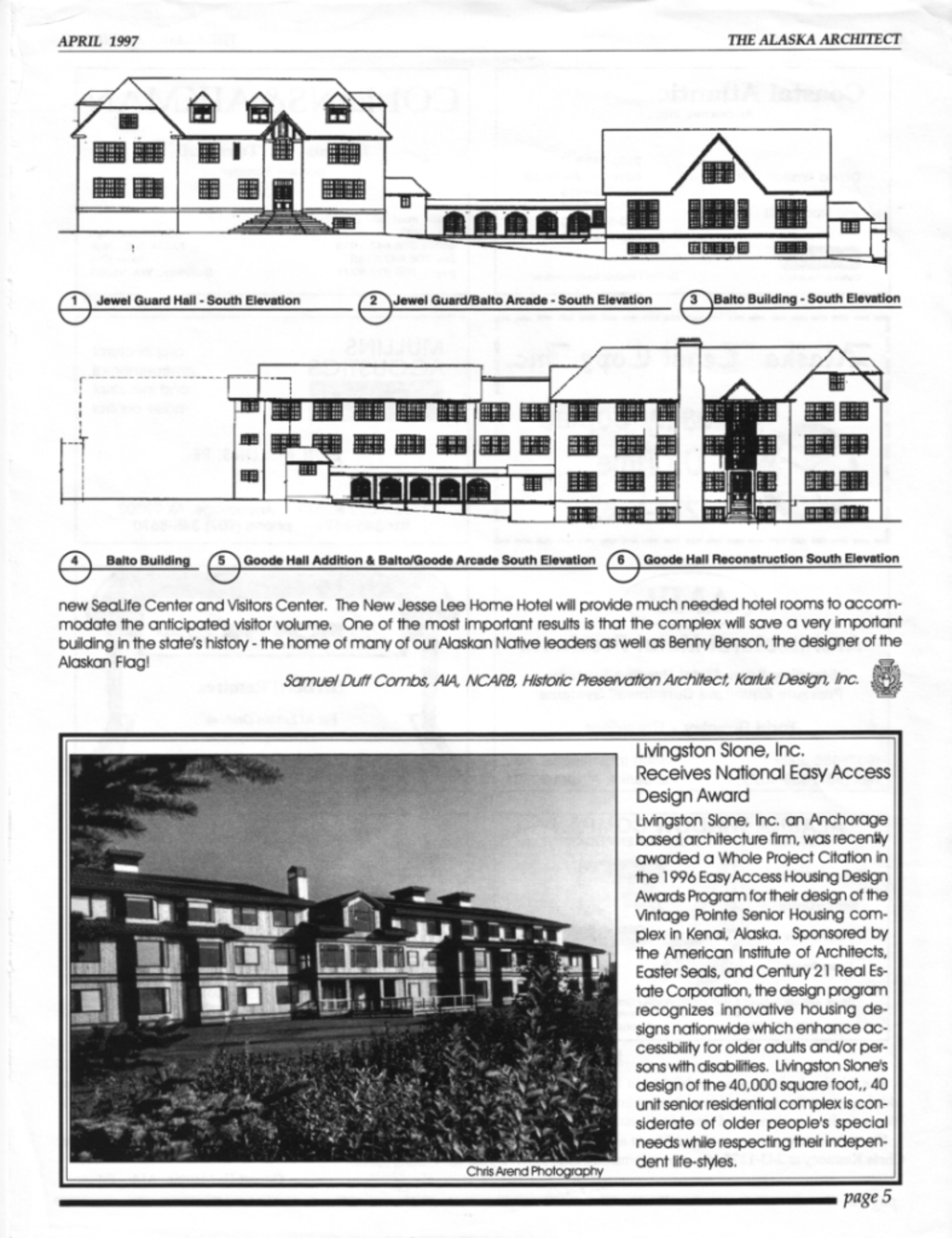 The Jesse Lee Home began construction in 1925 in Seward, Alaska.  The Home originally began in Unalaska, Alaska on the Aleutian Chain and existed there until 1925 when the services were moved to Seward.  It was established by the Woman’s Home Missionary Society of the Methodist Church.  The two original buildings in Seward were the Jewel Guard Hall and the Goode Hall.   Stanley Shaw, an architect of Tacoma, Washington State designed the two original buildings and they began construction in the spring of 1925 and were completed in the fall of the same year.  In April 1927, Benny Benson, who lived at the home was notified that he had won the contest for designing the flag for the Territory of Alaska.   Construction of a new building on the site began in August 1936 and was called the Balto Building after the famous lead sled dog Balto, who was one of the lead sled dogs for a team that participated in the serum run from Nenana to Nome to prevent a diphtheria epidemic in the winter of 1926.  The home was temporarily closed in 1942 by the U.S. Army, because they were fearful that it would become a target in World War II.  The home’s buildings were painted in tree camouflage due to their proximity to Fort Raymond, which had been established in 1942.  The home reopened in 1946 and was to remain open until 1964 when the Methodist Women’s Home Missionary Society decided to close the Seward Home and move the services to Anchorage.  The Goode Hall was determined to be too damaged in the quake of 1964, so it was torn down.  Since the home services were relocated to Anchorage in 1966, the Methodist Church deeded the property to the City of Seward, who subsequently sold it to private owners.  It has remained unoccupied for the last 38 years.  The Jewel Guard Hall and Balto Building were placed on the National Register of Historic Places in 1995.  The Goode Hall since it no longer existed was not part of the Register Nomination.  The Jewel Guard Hall and Balto Buildings will have their southern facades restored to original appearance.  The western, eastern, and northern facades will be restored, but will have modifications to existing elevations for life safety.  Interior spaces and features in the Arcades and in many locations within the original buildings will be restored or in some cases reconstructed.  The Goode Hall will be rebuilt to exemplify the original building on the southern facade, but will include an additional story to allow the required guestrooms for the hotel, which will be mainly housed in the Goode Hall and Goode Hall addition.   As shown the building will expand to the north and include an inner atrium and west addition that will house additional guestrooms.  The buildings are in relatively sound condition due to the removal of all interior finishes some time ago which allowed the structure to breathe and not to deteriorate as much as would have happened if the buildings would have been sealed.  The total square footage of the existing buildings-Jewel Guard Hall and Balto Buildings and their accompanying arcades is approximately 35,856 square feet.  The total for the Goode Hall Reconstruction & Addition is approximately 63,818 square feet.  The total square footage of the combined facilities is 99,674 square feet.  The total number of guestrooms shown in the existing plans is 155.  Twenty-two guestrooms are in the Jewel Guard Hall and 133 are in the Goode Hall Reconstruction and Goode Hall Addition.  The number of rooms may vary if the size of some of the rooms increases.  The total square footage will most probably remain the same to keep the total square footage under 100,000 square feet.  At $100 per square foot for both the renovation and the new buildings the cost would be approximately  $9,967,400 not including the cost of the Architectural and Engineering Design Fees, existing facilities, land, and site improvements.  Approximately 36 % of the total square footage is in the existing historical structures.  https://en.wikipedia.org/wiki/Jesse_Lee_Home_for_Children 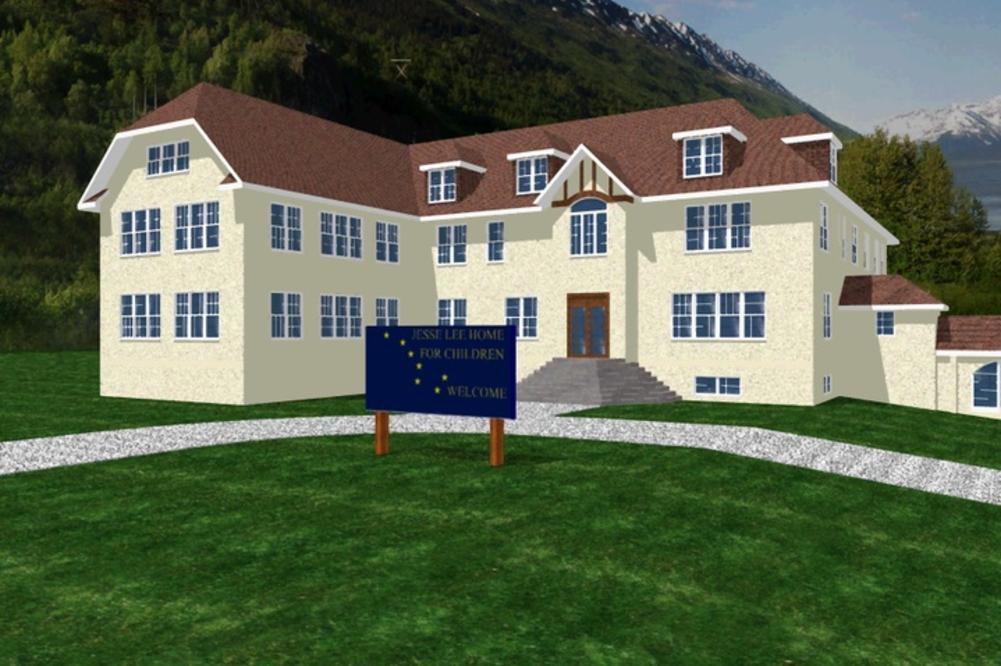